CNCDA President Brian Maas weighs in on Gov. Newsom’s order to ban new gas-powered vehicles
Last week California’s Governor, Gavin Newsom, signed an order banning the sale of new gasoline and diesel vehicles by the year 2035. This bold move set a precedent for sales moving forward in that state and others could possibly follow. On today’s show, we’re pleased to welcome back Brian Maas, President of the California New Car Dealers Association, or CNCDA, to take a closer look at this ban and regulations in his state. Watch the full segment here.

Tesla is facing challenges as it attempts to produce lithium for electric vehicle batteries near its factory in Nevada. Last week, Tesla CEO Elon Musk told shareholders that the company had locked down the rights to 10,000 acres in Nevada as it plans to become the first company in the world to produce lithium from clay deposits. However the electric carmaker is facing many obstacles with its plan due to hiccups with the permitting process, water access uncertainty, and critics questioning the company’s planned methods.

California is not alone in its plan to ban gas-powered vehicles. The state joined a list of 21 countries and regions that plan to ban gas and diesel sales in the next ten to fifteen years. The state of California could push the movement further along as many regions continue to consider moving away from traditional fuels. Great Britain, who had originally scheduled a ban in 2040, is heavily considering moving its target year up to 2030. Other notable cities and regions looking to take similar steps include Amsterdam, Barcelona, Hamburg, Mexico City, Paris, and British Columbia.

Sales forecasts for the month of September reveal that dealerships are getting top dollar for vehicles. According to a monthly forecast from J.D. Power, the average transaction price for new cars and trucks in the month of September is headed for $35,655, an all-time record high. The same forecast predicts that retail auto sales in the U.S. are on the rise. Retail sales are on pace to hit about 1.2 million, beating September of last year by about 3.4% based on the daily average selling rate. 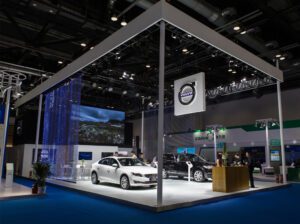 Beijing Auto Show foreshadows automotive retail future
The 2020 Beijing International Automotive Exhibition kicked off on Saturday, Sept 26 as the first major auto show since the coronavirus pandemic began after initially being postponed from its original April date. Huge crowds were present in the exhibition center as the event got underway despite the heightened awareness of health, a clear signal of a desire to return to normalcy. Read More