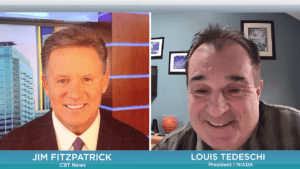 How independent auto dealers have been coping with the COVID-19 pandemic – Louis Tedeschi, NIADA
With the departure of Steve Jordan in September of last year, Louis Tedeschi was named the new president of the National Independent Automobile Dealers Association (NIADA). Now, roughly five months into his tenure, we sat down with Tedeschi to discuss how independent dealers grappled with COVID-19, as well as important agenda items for the association moving forward. Watch the full segment here.

This week, Joe Biden was sworn into office as the 46th president of the United States. Kamala Harris also became the first woman to ever serve as Vice President of the United States. During his inaugural speech, Biden encouraged the country to see his administration as a fresh start. In his speech, Biden said, “Together we shall write an American story of hope, not fear, of unity, not division, of light, not darkness. May this be the story that guides us.” During the first few hours of his term, President Biden signed 17 executive orders, including a mask mandate for everyone on federal property. Many dealers and automotive professionals are curious of the timetable for his policies impacting the automotive industry, as many expect Biden to have a strict policy on emission standards.

The Volkswagen Golf will no longer be produced at the company’s Mexico plant, signifying the end of Golf sales in the U.S. During its time in the U.S. market, Americans purchased nearly 2.5 million units of the Volkswagen hatchback. However, according to Cox Automotive data, the Golf has lost a lot of its popularity in the last half of the decade as sales have declined. While the standard Golf is being removed from the North American market, the company plans to launch new sportier versions of the vehicle, as the Golf GTI and Golf R models are expected to hit showrooms later this year.

As used-vehicle inventory starts to rise, the price of used vehicles has reached an all-time high. According to Cox Automotive, the used-vehicle supply rose to 55 days, up from 51 days last month. The total U.S. supply of unsold used vehicles closed December at 2.68 million units, up from 2.61 million in November and down from 2.97 million in 2019. Cox Automotive data found that the average list price for used vehicles reached a new high of $22,087, breaking the prior month’s record of $21,724.

Leon Edwards, former president of the National Automobile Dealers Association passed away this week at the age of 89. Edwards worked as a Chevy dealer in Birmingham, Alabama before being named president of NADA in 1995. During his tenure, Edwards strived to improve the relationship between dealers and automakers. His 58-year career proved his love and commitment to the industry. His son Lee Edwards is currently carrying on the family business. 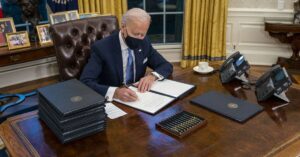 Impact of President Biden’s first executive actions on auto industry
Swearing in a new president usually means immediate executive actions, and this week’s inauguration of Joe Biden was no different. He got off to a busy start, overturning a few of former President Trump’s executive actions including regulatory matters, immigration, the census, and more. Perhaps one of the most notable executive actions he carried out was rejoining the Paris Accord, the agreement between nearly 200 countries outlining that they will try to limit global warming and climate change as much as possible. Of course, the auto industry is heavily impacted by environmental regulations and orders, so this will undoubtedly impact automakers and the industry as a whole. Read More 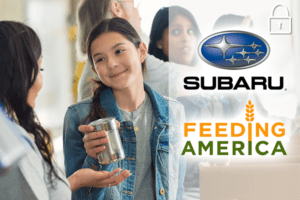 Subaru of America fights hunger with 100M meal donation to Feeding America
Subaru is best known for rugged vehicles with Boxer engines and standard Symmetrical AWD, but that could soon be overshadowed by their positive corporate identity. The Japanese carmaker has announced on Thursday that they’ve made an incredibly generous donation to Feeding America. Their financial gift will help provide 100 million meals to Americans that the hunger relief organization feeds through their food banks. With $1 representing aid for 10 meals, the $10-million-dollar donation will go a long way to quelling hunger pangs in American residents that experience food insecurity. Subaru will coordinate with Feeding America to disburse the funds among the 199 food banks they serve across the country. Read More