LMP Automotive Group, a growing auto-retail eCommerce company, has purchased a major stake in New York’s largest dealership group. The holding company’s acquisition of Atlantic Automotive Group is valued at $608 million. The deal is expected to add $1.6 billion in revenue, $38 million in net income, and will bring the company’s new vehicle franchise count up to 33. The combination with Atlantic Automotive is expected to enhance customer experience, lower SG&A per transaction, and expand the company’s online store.

Nissan is stepping away from the North American commercial van market. The move had been speculated on for months, that the automaker would end production of vans in its plants in the U.S and Mexico in 2021. Nissan confirmed the move as part of a cost-cutting effort aimed at helping the company reverse recent losses. Nissan’s shift away from vans will realign the company to focus on its core product lines. The impact of the pandemic has been only one of the many challenges facing Nissan. The company has struggled to revive sales since November of 2018 when former Nissan Chairman Carlos Ghosn was arrested in Japan and charged with numerous financial crimes.

During his visit to Toledo, Ohio, Democratic presidential nominee Joe Biden laid out his vision for manufacturing. Biden vowed to emphasize union labor and make it easier for consumers to “move to the vehicles of the future.” Biden spoke for nearly half an hour at a drive-in rally outside a United Auto Workers union hall in Toledo. Biden also said that he plans to create a network of 500,000 charging stations and offer rebates for those looking to swap out older vehicles for newer, more fuel-efficient ones.

The U.S. Government’s road and safety agency is investing complaints that the Chevrolet Bolt electric vehicle can catch fire. The probe conducted by the National Highway Traffic Safety Administration covers 78,000 Bolts made by General Motors from the 2017 through 2020 model years. The NHTSA found three reports of fires that began under the rear seat while the cars were parked and unattended. The fire damage was concentrated in the battery compartment and spread to the interior of the vehicle. The probe could result in a recall for the vehicle in the near future.

Online consumer engagement showing indications of industry rebound
Car shoppers are continuing a slow but steady push back to normal purchasing practices, according to analysis of marketing data by Comscore in a press release issued Tuesday, and used car shopping is where the greatest interest growth has occurred. How customers are shopping, however, has changed dramatically from in-person to online, helping retailers and marketing professionals better understand and plan. Read More

Adapting to Change: Being female friendly in the service department
Being female friendly is a necessity these days in all industries, including automotive, because the American woman is one of the most powerful economic forces on the planet. With $7 trillion in purchasing power, women account for 85% of consumer spending and up to 70% of repair shop customers. Okay, this isn’t exactly new information, but 2020 has brought a whirlwind of changes, and you need to know what “female friendly” means now. Read More

It may be difficult to find a dealer as unique as Ben Keating. Not only does he operate a successful dealership group, Keating Auto...
Read more

It may be difficult to find a dealer as unique as Ben Keating. Not only does he operate a successful dealership group, Keating Auto...
Read more
Sales Strategy

While disruptive technology sounds intimidating, it’s critical to support the changing way we do business. The “as-a-service” revolution is gaining more momentum now than ever before as a growing number of companies integrate their processes with cloud-based, data-driven platforms to better manage...
Read more
Sales Strategy

Lower volume, higher profits the name of the game for dealers on Black Friday

In yet another twist on a topsy-turvy year, Black Friday car deals are expected to be less aggressive than they have been in previous...
Read more
Load more 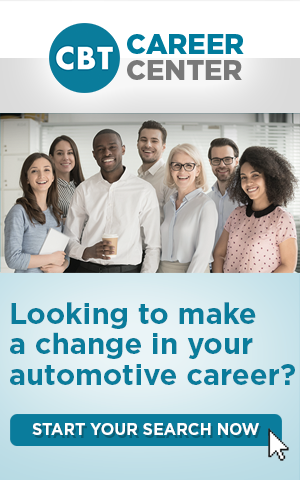 CBT News - November 25, 2020 0
Black Friday is one of the busiest shopping days of the year and although this year might look slightly different due to the pandemic,...

CBT News - November 25, 2020 0
It may be difficult to find a dealer as unique as Ben Keating. Not only does he operate a successful dealership group, Keating Auto...