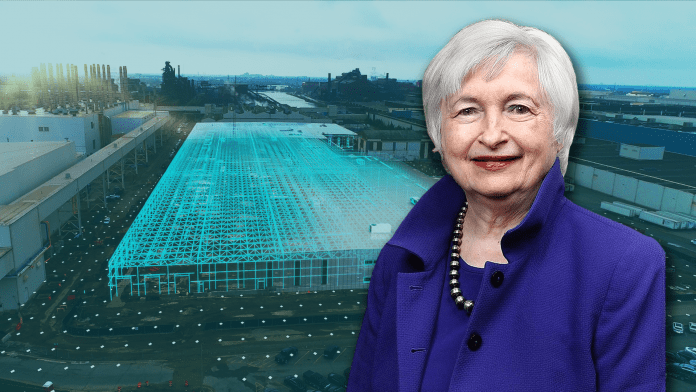 9/12/2022: US Treasury Secretary Janet Yellen made a visit to Detroit late last week, during which she had lunch with Detroit Mayor Mike Duggan, toured Livernois Avenue, and stopped at Ford Motor Corporation’s Rouge Electric Vehicle Center.

After touring the facility, Yellen gave a thirty-minute speech praising President Joe Biden’s domestic economic agenda. The secretary touched on the Inflation Reduction Act, the CHIPS Act, and bipartisan infrastructure law. She also noted that employment levels have returned to pre-pandemic levels and admitted that inflation was affecting Americans, saying that it was the administration’s “top priority.”

Yellen spoke about income inequality in the United States and described the economic policies as a “modern supply-side” that will support higher economic growth and fairness. Yellen also pointed to the pandemic as having exacerbated already existing issues, like supply chain issues.

“The pandemic exposed our vulnerabilities, but our economy had long been suffering from soaring inequality, weak growth, and a sense of falling further behind for many – for too many,” Yellen said. “Sluggish productivity growth and declining labor force participation has weighed down our economic potential.”

Republican lawmakers took Yellen’s visit as an opportunity to criticize the Biden Administration’s economic “failures,” including rising inflation. State Senator Tom Barrett, R-Charlotte, said Yellen first tried to say, “inflation wasn’t happening,” and then she said, “it was a sign of a good economy that was thriving, and that it was “transitory.”

“All of these things have stacked up in a way that has had devastating effects for working families in Michigan,” Barrett said. The senator also said the federal government is trying to “force us off fossil fuels when energy is the lifeblood of our economy.”

President Biden is scheduled to visit the Detroit Auto Show next Wednesday, during which he is expected to speak on the EV “boom” in response to his economic plan.

9/7/2022: Treasury Secretary Janet Yellen is scheduled to speak today at Ford Motor Company’s Rouge EV Center in Dearborn, Michigan. Yellen will tour the factory and is expected to meet with local leaders and business owners in the Detroit area during her visit, according to a press release from the Treasury Department.

“The Secretary will speak about how the President’s response to the pandemic spurred one of the fastest recoveries in our nation’s history and restored economic stability,” the release read. Treasury Secretary Yellen will also make remarks about “how the Inflation Reduction Act, the Bipartisan Infrastructure Law, and the CHIPS and Science Act represent a historic investment in making our economy more productive, more resilient, and fairer for workers and businesses.”

Ford recently announced it would be eliminating 2,000 salaried jobs and 1,000 contract jobs, mainly from the Michigan area, during a restructuring that will support “significant transformation” toward electrification. Officials from the state of Michigan approved an incentive package worth over $100 million for the company in June. The package required the company to add more than 3,000 hourly jobs.

Ford’s factory in Dearborn is where the company builds its electric F-150 Lightning truck. The company announced last month that sales of its EVs grew four-fold over the previous year, and the electric pickup sold within an average of eight days.

President Biden is expected to visit the Detroit Auto Show next Wednesday. He has attended the event in the past, including during his tenure as vice president in 2014 and 2017. He also visited Ford’s Rouge plant in May of 2021, during which he test drove the F-150 Lightning.