For months, the question has been asked: “How long will it be until Chevy makes the Corvette electric?” On Monday, GM President Mark Reuss answered that question. An electrified version of the iconic sports car will arrive next year, followed by an all-electric version.

In an interview on CNBC’s “Squawk Box” with Phil LeBeau, Reuss said, “We will have an electrified Corvette next year, so it’s coming very quickly. This is in addition to all of the great performance that Chevrolet and Corvette have been known for, for many, many years with our internal combustion engines.”

A tweet from Chevrolet quickly followed the announcement. The tweet says, “stay tuned for more,” and a video shows a Corvette mule drifting in the snow, presumably containing a hybrid powertrain. Viewers quickly noticed that the front wheels were spinning in the clip, revealing that the variant is all-wheel drive. With so many EVs and hybrids employing front electric motors to achieve AWD, that also won’t take anyone by storm.

Solely gas-powered Corvette models will remain in the lineup for the time being.

CNBC’s LeBeau asked about “playing catch-up” with Tesla, mentioning that GM’s electric models largely haven’t reached the market yet. He questioned whether GM could make up the distance. Reuss responded, “Our Ultium platforms are going to be our strength, and our pipeline is fully loaded.”

General Motors has been forging ahead with plans to electrify its fleet by 2035, and it’s no surprise that an electric sports car would be on the slate. However, the announcement of an electrified Corvette drew immediately polarizing responses on Twitter: 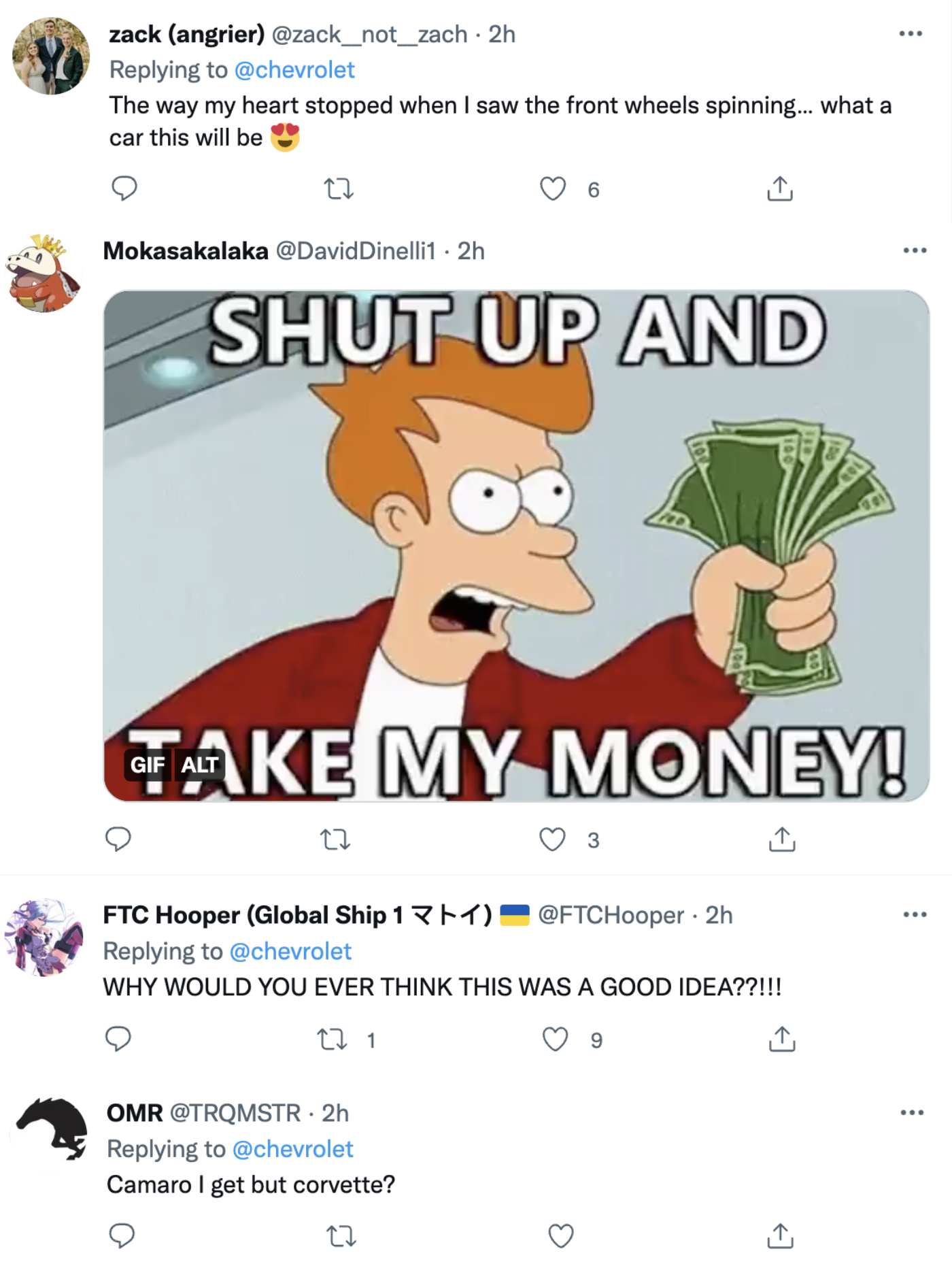 The news is bound to ruffle feathers for sports car purists, much like the adaptation from a front-engine to a mid-engine sports car, the most controversial modification the iconic line has ever implemented. Although there’s less opposition to an electric performance model, purists will question why an electric version of the Corvette should be produced rather than using a different nameplate.

The news of an electrified Corvette comes the day before Ford hosts an event to launch the F-150 Lightning. And when the model reaches production and sales next year, it will come at approximately the same time as the Tesla Roadster. However, it’s unlikely that Corvette’s all-electric model will arrive in time to compete with the pure EV Tesla supercar directly.

Although GM’s Bolt EV and Bolt EUV have been on the road for a few years, there are several important models coming to the market shortly, like the Cadillac LYRIQ and Silverado EV. The electric developments have been in the news almost daily for the carmaker. A collaboration with Honda will find GM’s Ultium batteries in both Honda’s exclusive models as well as low-cost crossover EVs that the two carmakers will collaborate to make. Two weeks ago, GM agreed to a multi-year deal with Glencore to source cobalt, the highly sought-after material that’s crucial for making their lithium-ion battery packs.