U.S. automakers and their dealers will sell a forecasted 17.1 million light vehicles this year, not a record, yet nothing to beef about either, says Steve Szakaly, chief economist for the National Automobile Dealers Assn.

It would come in under 2016’s record-breaking 17.5 million deliveries, but “it’s another year above 17 million,” Szakaly says in a media conference call during which he and NADA Chairman Mark Scarpelli offer first-quarter economic insights affecting auto retailing.

“Clearly, consumers are shopping,” Szakaly says. The average transaction price in the first quarter of this year reached $34,000 compared with $33,000 for the same period in 2016.

That rise is attributed in part to a strong market demand for light trucks and utility vehicles that typically sell for more than do cars, which are less in demand.

“The competition is fierce, and always has been, which means it’s a great time to buy a new car,” says Scarpelli, president of Raymond Chevrolet and Raymond Kia in Antioch, IL. “The demand is still high. In certain places it is not so strong, but the industry is in great shape.”

Of the expected sales plateau this year, he says, “Everyone knew there’d be challenges.” Beyond 2017, he predicts “more years above 17 million.”

Another negative: Wages are increasing at a slower rate than employment is, he says. “In some cases, wages haven’t kept up with price increases.”

The Federal Reserve is expected to up interest rates about 0.5% this year, but that’s not expected to hurt new-vehicle sales, Szakaly says. However, he notes soaring rates in the past have been killers.

“Automotive sales don’t die on their own; they die because someone has bludgeoned them with high interest rates,” he says.

He doesn’t expect automakers will repeat sins of the past and start heaping on costly incentives to spur sales. “No one has an appetite for that.”

In a market where utility vehicles are hot and cars are not, Scarpelli is asked if dealers might completely switch their inventory to SUVs, CUVs and pickup trucks. “The product mix has changed and changes with consumer demand,” he replies. “On the other hand, there is still (a level of) demand for sedans and coupes.”

But, Szakaly says, “We continue to see incentives rise on sedans.”

This article originally appeared at https://wardsauto.com/dealer/nada-predicts-not-bad-171-million-year-auto-sales 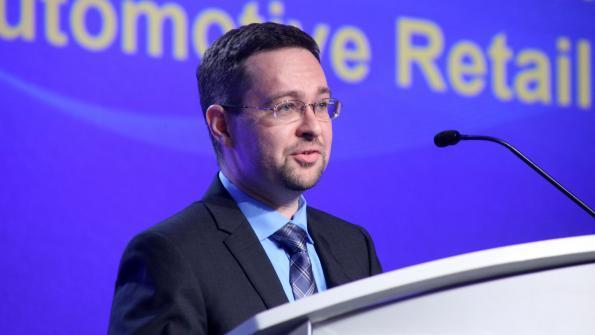