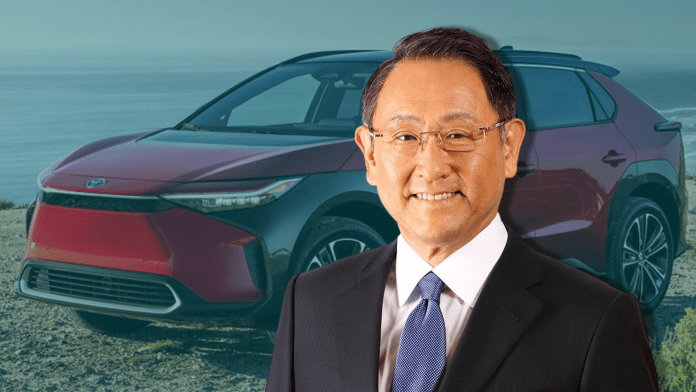 Toyota recently held its annual dealer meeting in Las Vegas, during which the company’s CEO, Akio Toyoda, made statements about the automaker’s electrification strategy. Toyoda seemed to double down on the company’s beliefs that the transition to all-electric vehicles will likely be slower than anticipated.

“Just like the fully autonomous cars that we are all supposed to be driving by now, EVs are just going to take longer to become mainstream than media would like us to believe,” Toyoda said. “In the meantime, you have many options for customers.”

Toyota is the world’s largest automaker and has pledged over $70 billion in investments for electrification over the next nine years. Half of that amount is earmarked for all-electric battery vehicles. Despite the large amount, the company’s investment plans fall short of what environmental critics believe they should be, considering the size and scope of Toyota’s global footprint.

Competitor companies like Volkswagen and General Motors have signaled they are going all-in on all-electric vehicles. At the same time, Toyota maintains its strategy of investing in a range of electrified vehicles.

Toyoda implied that all-electric vehicle adoption would be slower than anticipated due to a lack of infrastructure, high prices, and how customers’ choices will vary from region to region. He said he believes it will be “difficult” to fulfill recent regulations, like the California ban on internal combustion engines, by 2035. He also pointed to the “tremendous shortages” of lithium and battery-grade nickel over the next decade as an issue for production.

Toyota has a goal of reaching carbon neutrality by 2050. The company says it has already avoided 160 million tons of CO2 emissions through the sale of the Prius, which launched in 1997.

“Toyota can produce eight 40-mile plug-in hybrids for everyone 320-mile battery electric vehicle and save up to eight times the carbon emitted into the atmosphere,” read a statement from the company.

Environmental groups have criticized the company’s strategy, like the Sierra Club and Greenpeace, which ranked Toyota at the bottom of its auto-industry decarbonization rankings for two years in a row.