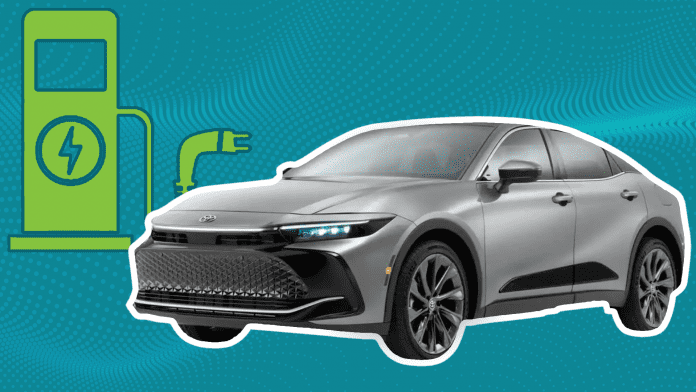 American buyers interested in getting their hands on one of Toyota’s upcoming Crown PHEVs will be happy to hear that the hybrid is coming to US shores. The 2023 Crown, unveiled earlier this year, was not initially planned for release in the US, according to reports. But Toyota CEO Akio Toyoda spoke with MotorTrend at a recent conference in Las Vegas and said the Crown would make it to the US with a plug-in hybrid configuration.

There is no official announcement from Toyota regarding the Crown coming to US markets; therefore, little is known about the vehicle, including its potential PHEV powertrain. The company currently offers the Prius Prime (PHEV) hatchback and the newer RAV4 (PHEV) compact crossover.

Sources say that the Toyota Crown will feature a Hybrid Max configuration, known as the sportiest option, with an available 340 horsepower. That would make it the most powerful electrified vehicle from the Japanese automaker, as the current RAV4 Prime offers just 302 horsepower.

It would also make the vehicle good competition for rival EV automakers. Lexus’s upcoming 2023 RX hybrid midsize SUV offers 367 horsepower but cannot plug in. A future PHEV version of the RX is expected later next year but will feature the same powertrain as the RAV4 Prime.

All expectant buyers can do now is wait for an official announcement from Toyota. While it seems likely, based on the CEO’s comments, that a plug-in option will make it to the US, there is no word yet on whether a fully electric version will ever be available in the states.