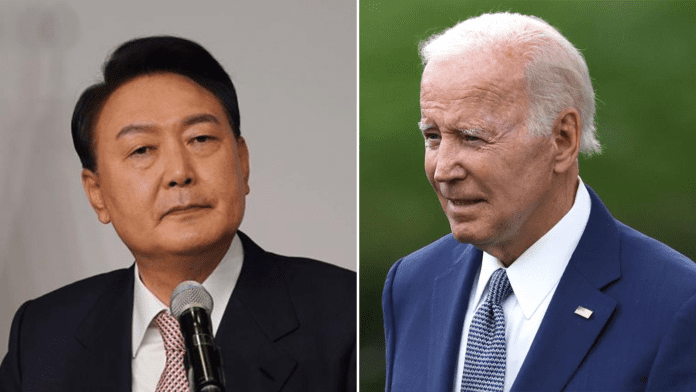 South Korean President Yoon Suk-yeol will make his first official trip to the United States this week, and talks about electric vehicle subsidies will likely dominate much of the conversation. Yoon flew from London, where he attended the funeral of Britain’s Queen Elizabeth II, to New York on Monday. He will attend the UN General Assembly and hold a summit with US President Joe Biden before flying to Canada and then returning home. The leaders are expected to speak about the growing weapons threats from North Korea and South Korean concerns regarding the newly passed Inflation Reduction Act.

The Inflation Reduction Act eliminates federal tax credits for electric vehicles made outside North America, which means Korean companies like Hyundai and Kia will no longer be eligible for those subsidies.

Korean government officials have labeled the law as a betrayal after Biden promised to boost bilateral economic ties, spurring South Korean companies to pledge significant investments in US factories. Officials have asked Washington to postpone the new rules to give Hyundai time to complete its factory in Georgia in 2025. Kia also recently announced plans to start producing electric cars in the United States in 2024, although few details were provided.

South Korea recently sent several high-ranking officials to the US to help communicate concerns and press for exemptions to the law. Trade minister Lee Chang-yang will visit the United States this week. A senior South Korean official, who is close to the matter and spoke on the condition of anonymity, said, “It’s structurally quite complicated because it’s already signed into law, but there is a way to go about it.”

South Korean Prime Minister Han Duck-soo, speaking from Seoul on Tuesday, said the Inflation Reduction Act “seems to be a violation of the Free Trade Agreement” but noted the South Korean government is focusing on bilateral dialogue for now.