Q3 for the retail auto industry has come to a close. And today we’re joined by NADA senior economist, Patrick Manzi, to get an in-depth analysis of the key highlights and results for the quarter.

Jim Fitzpatrick: Welcome back to the show, Patrick.

Patrick Manzi: Thanks, Jim, for having me.

Jim Fitzpatrick: Sure. So let’s talk about some of the winners and losers for the month of September, and then also for the quarter.

Patrick Manzi: Sure. So September looked a lot like many previous months that we’ve seen throughout the rest of the year – that is, sales were concentrated mainly in the light trucks space, and within that in the crossover segment. That segment has been red hot. It now represents more than 40% of all new vehicles sold, and it’s just stealing market share away from all the car segments which have been bleeding market share pretty much all year. Pickups are also very hot right now, picking up a couple of points of market share through the third quarter.

Jim Fitzpatrick: Yeah, for sure. And then of course, the affordability factor with all of these trucks and SUVs, the average price of a car is now … What? Exceeding $37,000 or thereabouts?

Patrick Manzi: Yeah. We’re just shy of $37,000. Our latest data on average transaction prices is through July, but it was maybe a 30 or 40 bucks below $37,000. And so with that, what we’re seeing is that new vehicles are becoming unaffordable for a lot of people out there. Right? [inaudible] Sort of price level.

Patrick Manzi: But the good news is that we’ve had such high leasing penetration over the past few years, and now all of those vehicles that were leased – they’re now two to four years old – are coming back to dealer lots. And customers can come in and they can get, in many cases, a vehicle that even looks the same, has many of the same features – luxury trims – as the one on the new lot. It just has 30,000 miles on it, and we had it at a significant discount. You know? Used vehicle average transaction prices at a franchise dealer right now are around $21,000, so that’s a significant gap from the $37,000 average new price.

Jim Fitzpatrick: That’s right. So talk to us about some of the highlights for Q3 sales.

Patrick Manzi: So we did see two interest rate cuts in Q3, kind of out of the ordinary there, and certainly helped some customers be able to afford that monthly payment – be it on a new or used vehicle. It also is going to help dealers with their floor planning costs. Which over the past few years when interest rates were low, floor planning actually became a bit of a profit center for the average dealership. That eroded last year as interest rates went up throughout the year. And now they’re going to get a little bit of relief there with their inventory financing, maybe be able to keep a couple more vehicles on the lot, hopefully to reach more customers with that.

Jim Fitzpatrick: Sure. How does the latest data affect your sales forecast for the rest of the year?

Patrick Manzi: So I’m still sticking with my sales forecast of 16.8 million units. Year to date, we’re running at … I believe the data from Wards this morning showed a 16.98 million unit [inaudible] through the third quarter. I think sales are going to fall off a little bit in the colder months here. And unless we see a big fleet push from manufacturers, or maybe a significant ramping up of incentive spending, I think sales are going to continue to post declines relative to last year for the last three months, and we’re going to close out the year right at 16.8.

Jim Fitzpatrick: Have you seen any impact from the the GM strike?

Patrick Manzi: I haven’t really seen any concrete data on this. But it’s been going on for a couple of weeks now, so eventually all that inventory that was on the ground is going to dry up and dealers are going to need more vehicles. So we’re still trying to piece together exactly what’s going on, and what the potential outcomes could be. But I think dealers hope that they come to a resolution soon.

Jim Fitzpatrick: Sure. We finally … I never thought we’d see the winning streak at Subaru break after 93 consecutive months. Talk to us about that.

Patrick Manzi: Yeah, definitely. I was just as shocked about Subaru as you. But it is a peculiar month. There were only 23 selling days, down from 25 last year. And there were also … The Labor Day sales weekend was counted in August. Right? Subaru’s also going through a big model changeover with some of their key nameplates out there, and I think they’re trying to clear out inventory of the old generation. So it could be a little bit of waning demand, but I think it’s also just the peculiar timing of this month. I think Subaru’s still in a pretty good position.

Jim Fitzpatrick: Sure. And then I understand BMW and Mercedes were battling out to the very end with only maybe 34 cars that separated the winner from the loser. Right?

Patrick Manzi: Yeah, I mean, they’re always neck and neck going back and forth at each other. It’ll be interesting to see how the year closes out.

Jim Fitzpatrick: Sure. I bet there’s going to be some GMs that are going to be screamed at from their DMs to say, “You couldn’t RDR those last couple of cars? We missed it by 34 units? Jesus! That’s incredible!” But your forecast still remains relatively high at 6.8. I mean, this is the good stuff for dealers. Right? For the dealers that are listening to us right now, they’re hitting high fives, going … You know? We’re talking 16.8. That’s another great year in the auto industry, isn’t it?

Patrick Manzi: Yeah, it is. It’s another steady robust year, and really looking forward beyond this year and into 2020 and beyond. We’re really expecting sales will continue to fall off a little bit, but sort of plateau in that mid to high 16-point-whatever million unit range. Right? So we do expect that, barring any unexpected shocks across the economy, that new vehicle demand is going to be robust for the next several years. And also dealers should take note that when we have steady new-vehicle sales years like this that are very robust, that used-vehicle supplies are going to be very solid for the next few years as well. And as we’ve seen in the data those are, in many cases, just as beneficial to dealers as selling new vehicles. In fact, sometimes some dealers prefer selling these used vehicles. So the outlook for dealerships going forward, from my perspective, is very positive. There are a lot of opportunities out there.

Patrick Manzi: Yeah, I do. It still represents a significant value compared to a traditional finance contract on a new vehicle. And many people out there are payment conscious. Right? So maybe financed a vehicle last time at 450, and now you come in and the best you can do is a lease at 450 rather than a new finance contract. I think a lot of people are going to take that deal because they figure out what they want to pay before they walk into the store, and I think I think a lease is going to be a good fit for many people out there.

Jim Fitzpatrick: Yeah, for sure. What’s been your experience when dealing with an election year? Is that anything we should be concerned about in 2020?

Patrick Manzi: I don’t think it’s going to play too much of a role in new and used vehicle sales. I think as long as consumers are still confident in the economy – which we have seen, consumer confidence numbers are still pretty strong even though they have been volatile – as long as the labor market remains strong, GDP growth is consistent, I think all of those things add up to steady years for vehicle sales.

Jim Fitzpatrick: And as senior economist for a large organization – as you are at NADA – I haven’t heard the recession concern at all. You know? You hear kind of this fear out there in some of the anchor’s voices on CNBC and Fox Business. Should we be concerned about a possible recession looming out there?

Patrick Manzi: I think at this point it’s a little too early to tell. You know? We saw the yield curve inversion earlier this year, which puts it at 18 to 24 months, so maybe start to think a little bit more about it next summer and how the economic data looks at the end of the year. We have seen a couple of indicators out there that might cause a little bit of concern, but they haven’t really been flashing negative for too long of a period of time. So there’s always a chance that it could just be a blip, and things could correct themselves and they go back to normal, but as I said I think it’s just still too early to call.

Jim Fitzpatrick: Yeah, sure. Well Patrick Manzi, senior economist for NADA, I want to thank you so much for taking time out of your busy schedule to join us on CBT News.

CBT Automotive Network, the number one most-watched network in retail automotive. This has been a JBF Business Media production. 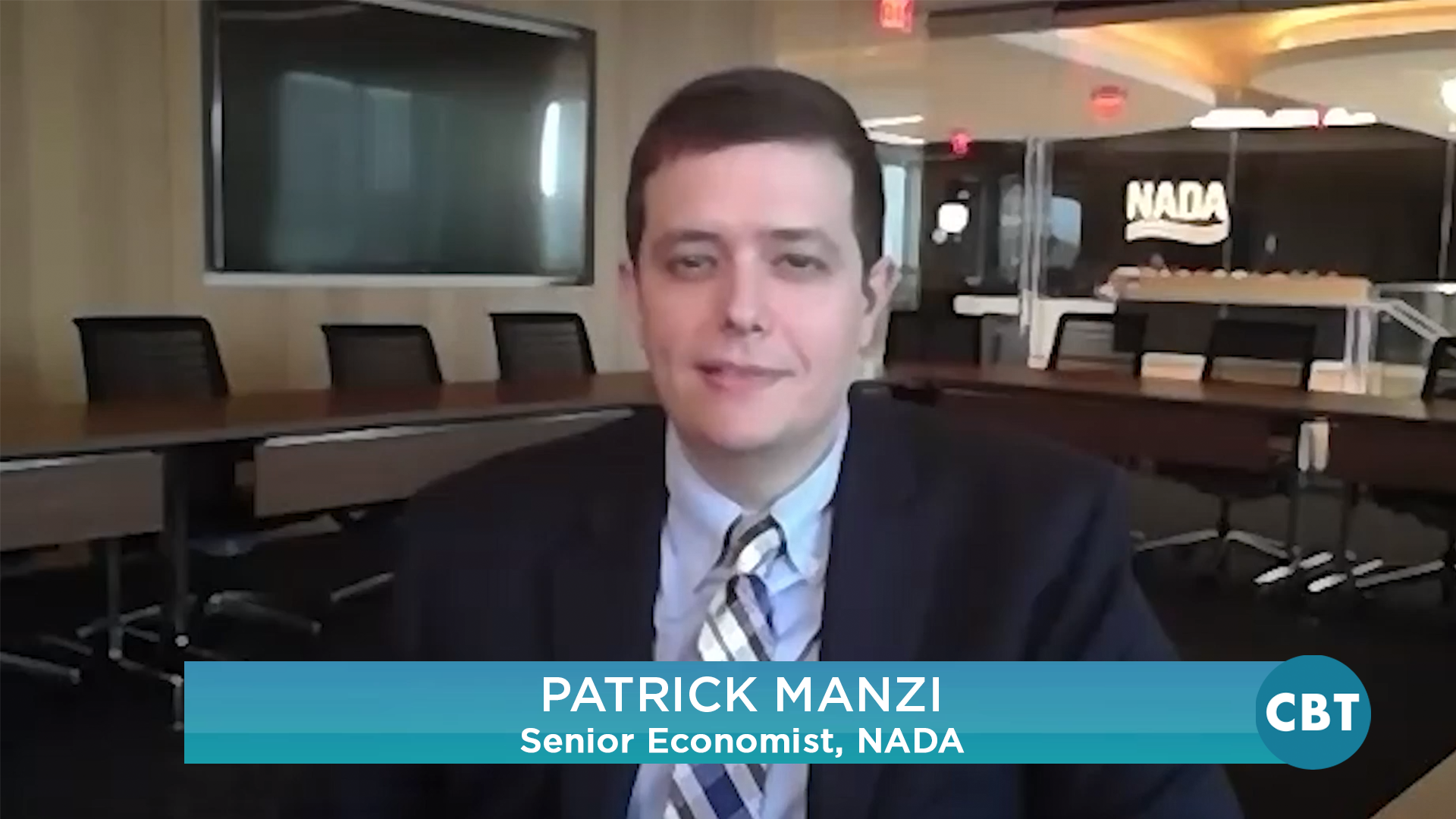