On today’s show, we discuss the pitfalls of high sales manager turnover, and the strategies dealers can use for better hiring with Brian Finnegan, president of Advanced Dealer Concepts and former sales training director with AutoNation. Brian has also served as general manager of some of the largest Mercedes Benz and Lexus dealerships in the southeast.

Jim: We’re so happy to have you back on the show, Brian. So welcome.

Brian: It’s great to be here, Jim. Glad you invited me again.

Jim: Cool. Yeah, our conversation last time kind of took us down the road of managers and skill sets, and where we see that going. I know we touched a little bit on turnover and I know that’s something that’s near and dear to your heart. So let’s kind of pick it up there where we left off last with regard to managers. We had a lot of comments on that. And I think dealers want us to drill down a little bit. So I know that there’s managers out there listening to us right now that have a tremendous amount of things to do in a day. Sometimes they’re doing it good, sometimes they’re doing it not so good, but kind of pick up on that and talk to us about that mid-level manager that’s out there on the showroom floor.

Brian: And I think the problem is it’s very difficult for a dealer or a general manager to really find the right candidates for a middle management position. And I mean in a perfect world, obviously we would be developing them from the sales force and being able to promote from within. But here’s the point. If that person leaves, whether it’s a good one that leaves or one that you needed to replace, how long is it going to take you to really replace them? And if you’re going to have to go outside of your own group of dealerships to bring someone in from the outside. Here’s what I see now we’ve got an empty slot because the guy just left for whatever reason. How long does it take to advertise for one, interview one, screen one?

Brian: At minimum, right? So now your other manager is doing double duty for six to eight weeks. We’ve burned him out something fierce.

Brian: So there is no doubt that turnover of middle management is really, really expensive. We mentioned the last time that turnover in the sales force is upward of 70% across the country, right?

Brian: That number is still pretty accurate. Well, I think what we’re talking about with management turnover is the biggest cause of that. So the point is this, do you have bench strength? Do you have people that can fill in those kind of positions?

Brian: You know, that’s not always going to be the case, but it certainly has been the case many times, especially when you’re emergency hiring. You know, the guy just bailed out on you and now you’ve got to fill the slot. But if there’s anything that dealers need to take a look at today, and I said this to a dealer two weeks ago, “Do you know your salespeople? Have you ever sat and talked with them? Because quite honestly they could be the future of the dealership.”

Brian: In a perfect world they would be, right?

Brian: But I’m not sure that we’re hiring with that thought in mind.

Jim: Right. We hire band aids, don’t we? And again, so don’t send me a nasty email cause I’m not calling everybody this. I’m just saying that there are still some dealerships that hire to put a quick band aid on it and just bring in somebody that can, we always say fog a mirror and kind of fill the seat. But back to your point about hiring the right people and then cultivating them.

Brian: Well and you’re right. I mean the good dealers are not suffering from this. But they’re only a percentage of the dealer body. The average dealer out there, quite honestly, and I’ve been guilty of this as a GM, we hired salespeople and I didn’t meet them until they were hired. So who is determining whether they really were going to be a future player?

Brian: The sales manager that was interviewing them.

Jim: That’s right. Not to mention, from the applicant’s standpoint, he or she’s coming in saying, I’m going to work for this organization, but I’ve never met the general manager or the dealer. Wouldn’t that have been a nice touch in the interview to say, wow, the GM stepped in, spent a few minutes with me. And then also you can offer the hiring by committee rather than just one salesperson going, “Yeah, I know your buddy or I went to school with them or whatever. Yeah, you’re hired. Go grab a desk.”

Brian: Well, the dealers get frustrated because there is a lot of turnover and you know, interviewing salespeople, sometimes you go through six, eight, nine candidates before you find one and if you need to hire two or three, that’s an awful lot of interviewing and hiring. Well the managers get burned out on it also and now they just want to get those positions filled. So, let’s circle back. I mean, the subject that I’m talking to dealers about is, all right, where’s the future of your dealership? Are you developing bench strength? Are you hiring people that really can come through a career path and be players for you?

Brian: There was a store, I don’t know if I should mention it or not, but years and years ago, I did an awful lot of work with Gunther Volkswagen and I’ve used them as an example for years because what Gunther had was about six salespeople that had now been there for two, three years. They’d been trained properly. They were on a consistent process. We were trying to figure out how we were going to promote them. Whereas other dealers, they don’t have that. Gunther actually went out and had to buy more stores to put these people in, right?

Jim: And I think Gunther for many years was the number one Volkswagen dealer in the country.

Brian: And Mazda also, because they developed people with consistent process all the way through. There was no problem filling positions in middle management. As a matter of fact, they put people in there who had never done it any other way that had been two years on a very good process. It only took a matter of a couple of weeks to make them good desk managers.

Jim: For the sake of time. Touch on some of the solutions to that because obviously that is a problem and dealers that are watching us today are saying, yeah, what if my star desk guy left or, or even one of the desk guys left? I have two or three salespeople, I mean managers, one of them leaves. That’s going to create a problem in my dealership that could cost me. Other salespeople that leave. It could cost me customers. It could cost me profits and such. So what’s the remedy to that? If it was Brian Finnegan Automotive Group, what would you be doing with the bench to be cultivating them and getting them ready to take that seat in management?

Brian: Well, first of all, you’re right. I mean, we’ve always talked about sales turnover, but really the most damaging turnover is middle management. Because it does, it trickles down and causes chaos all the way through.

Brian: So the solution starts with this. First of all, know who’s being hired into your sales department. Think to yourself, three years down the road, if this turns out to be a really great candidate, the right qualities, the education, the obvious leadership skills. Those are the people we want to hire. But without a career path, they’re not gonna stay for very long. And if they’re working for managers that don’t really know how to manage, they’re not good leaders, they also won’t stay for very long. So the first thing we got to say to ourselves, all right, let’s start hiring quality people. Let’s give them a package that can allow them to stay. And if we’re nine months, 12 months, 15 months down the road and they’re starting to do fairly well, and they don’t need to be superstar salespeople. You start to see those kind of qualities. Let’s start preparing these these people now. Let’s send them to a management school. Let’s prepare them for leadership. Because quite honestly, and it’s something you and I have been wanting to talk about, there’s a monstrous difference between leadership and management.

Brian: And obviously that’s a subject that we could talk about for hours.

Jim: We would love to have you back to talk about that. Mr. Brian Finnegan thank you so much for joining us on CBT News. It’s always a pleasure and I know our viewers get a tremendous amount when you’re here. So thank you for joining us.

Brian: I appreciate it. It’s great being here.

Today’s dealer. Today’s brought to you by. This has been a JBF Business Media Production. 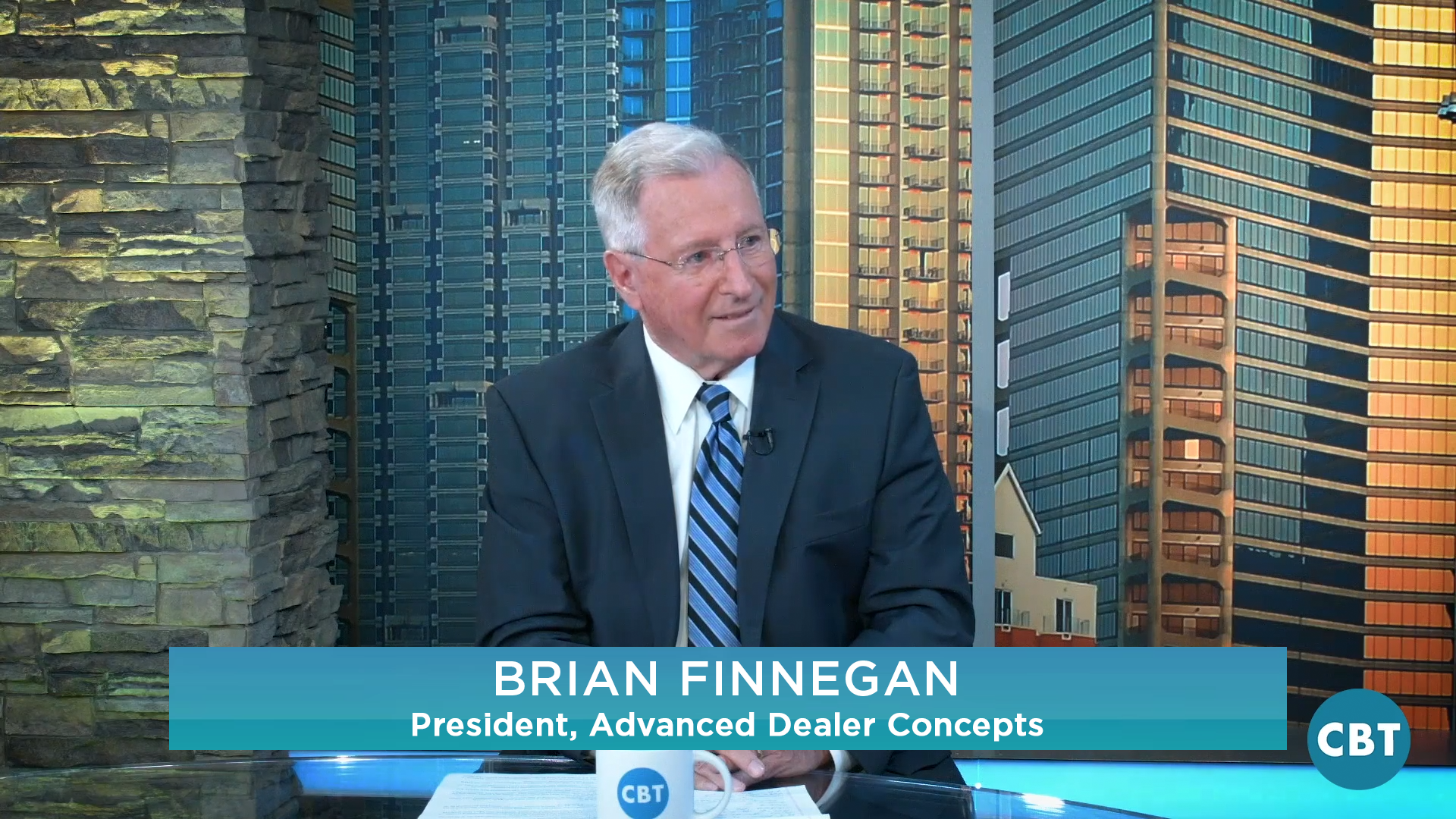