I’ve known Dennis Tilko for more than 30 years. In all that time, the only thing that’s changed is his attitude. It keeps getting more and more positive. For Dennis, attitude is everything, and good or bad, to him everything is an opportunity.

Dennis has worked in the automotive business for as long as he can remember. He started out cleaning and detailing cars during high school to help pay for college. After graduating he started full-time as a sales associate in a Cadillac dealership.

“I was really frustrated one day,” he says. “I lost a sale to the Oldsmobile dealership next door, even though I offered the customer more on her trade and a better price on the car.”

Dennis could not figure out why she would leave and pay more at another dealership. He was perplexed, so he called her to find out what could he have done better?

“She told me the people at the other dealership were nicer. They offered her coffee, gave her a tour, introduced her to people in every department and treated her like she was a VIP from the second she walked in.”

He described it as an “ah-ha” moment. He realized there was much more to closing a sale than offering the best price.

He realized salespeople are great at turning buyers into shoppers. Even so, he wasn’t quite sure what the difference was. After all, he had followed his training. He greeted the customer, delivered a hood-to-trunk presentation, took the customer on a demo drive, negotiated and thought he was close to closing the sale. 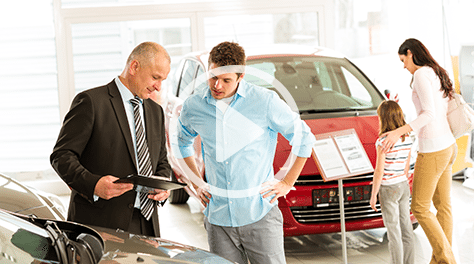