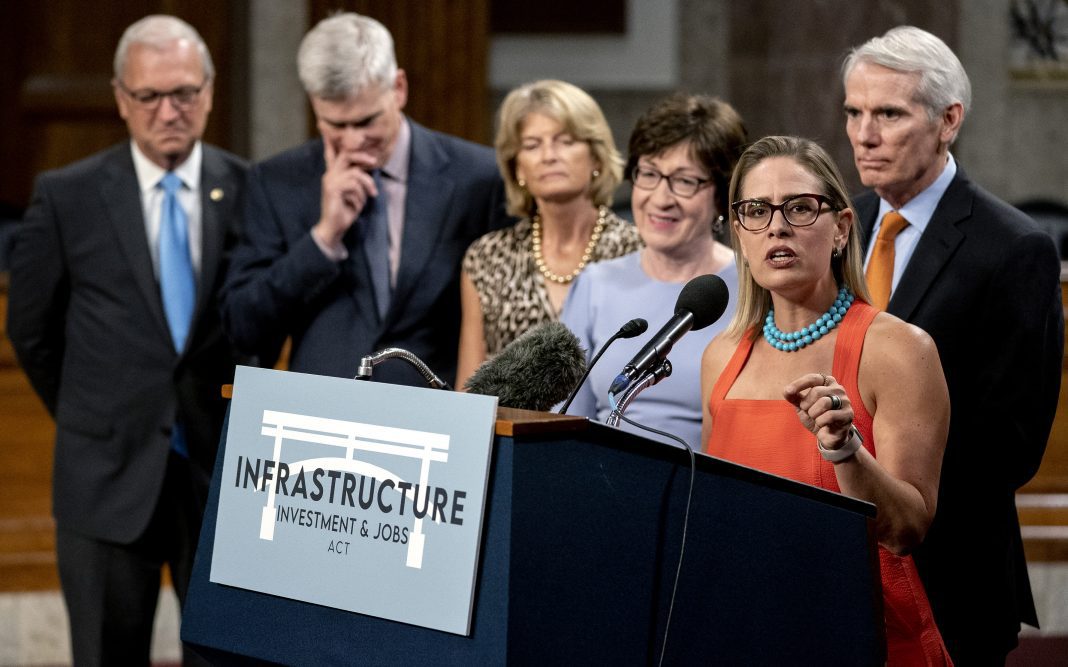 On Tuesday, the U.S. Senate voted to pass a $1 trillion infrastructure plan that includes goals to repair existing infrastructure as well as implement new initiatives that include climate protection and the expansion of broadband capabilities. Ohio Senator Rob Portman stated that “it’s going to improve the lives of all Americans,” and Senate Majority Leader Chuck Schumer said that the bill would “strengthen every major category of our country’s physical infrastructure.”

Among other things, the bill the Senate has signed consists of approximately $110 billion towards bridges and U.S. roadways, $73 billion towards power grid modifications and updates, $65 towards the expansion of broadband capabilities, $66 billion towards Amtrak and other rail transportations, and $25 billion towards airports. The bill has been the topic of a fierce debate in Congress for the past few months, and despite the Senate passing it with a 69-30 vote, the House is expected to take even longer.

Implications for the auto industry

Of course, any infrastructure bill will have some sort of impact on the auto industry. The current bill supports electric vehicle (EV) technology, which aligns with Congress’s push for 50% of new vehicles to emit zero emissions by 2030. In June, AlixPartners released an analysis showing that EV investments have risen exponentially and are expected to reach $330 billion in 2025 despite the “variable-cost penalty of $8,000-$11,000 per vehicle.”

The Alliance for Automotive Innovation’s president, John Bozzella, announced that the group “applaud[s] the bipartisan efforts that resulted in Senate passage of the Infrastructure Investment and Jobs Act” and added that “collaboration on a comprehensive strategy will be key moving forward.”

Bozzella also expressed satisfaction with the “$7.5 billion included for electric vehicle charging,” which he stated, “can certainly help jumpstart public investment in a nationwide charging network.” He also noted the alliance is “working with Congress to craft the additional complementary policies necessary to further boost investment in the domestic EV supply chain and incentives that encourage consumer adoption of EVs.”

The bill also orders the Department of Transportation to devise updates to certain vehicle features, which includes rules for automatic vehicle shutoff, new regulations for headlights, and a requirement that new vehicles must be manufactured with so-called drunken driver detection capabilities. Although a specific deadline was not provided in the bill, new vehicles will likely ultimately also be required to come with updated crash-avoidance features along with forward-collision notifications and technologies for emergency braking, lane-departure notifications, and lane-assist features.

Despite these measures, the bill’s critics say it doesn’t go far enough with its vehicle safety rules, stating that there are too few compliance and regulatory requirements. The Center for Auto Safety expressed its dissatisfaction, saying that the bill “is like a new car prototype: it is flashy, took a lot of effort to build, and includes some new praiseworthy features, but it remains an unfinished product in terms of making an immediate impact on the 40,000 annual crash deaths in our country.”

Future of the bill

The bill’s authors have reported the federal government will pay for the bill in full, but critics have continually claimed the U.S. government does not have the money to fund the plan and it would hike inflation even further while also hurting taxpayers. These claims have been bolstered by the Congressional Budget Office, which released a report in early August estimating that the bill would “add $256 billion to projected deficits” between this year and 2031.

While the Senate has deemed Tuesday’s vote a success, the bill’s future is uncertain, as the House must vote on it but has claimed the representatives will not vote until the Senate also approves a different $3.5 trillion bill related to social policy in the coming months. That bill is expected to face even more disagreement and division between the two parties and will likely postpone the finalization of any infrastructure bill.