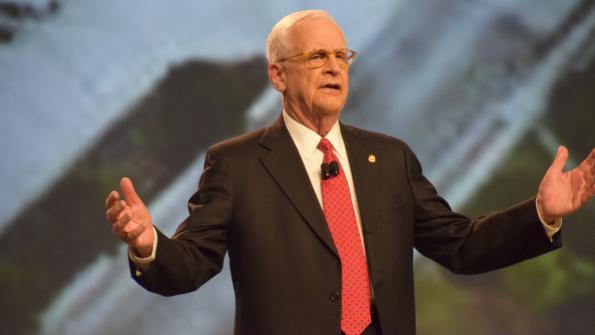 Bill Fox, who represents New York’s franchised new-car dealers on the NADA board of directors, will be sworn in as the organization’s chairman at this month’s convention and expo in San Francisco. Car Biz Today asked Bill about his background in the industry, the organization’s goals and objectives for 2015, and what auto dealers can expect this year.

CBT: How and when did you get in to the car business?

BF: My family started in the car business about 39 years ago in upstate New York. In 1976, my sister and I purchased a small Chevrolet dealership in Weedsport, N.Y., and turned it around into a successful business. Over the years, we acquired several other franchises. Today, my sister and I are partners at Fox Dealerships, Inc.

CBT: How many dealerships do you own?

BF: We own and operate four dealerships in Auburn and Phoenix, N.Y. We employ 180 people who have been instrumental in our long-term success. We are fortunate to have such a stable workforce. More than half of our employees have been working with us for five years or longer.

CBT: How many brands are represented?

CBT: How and when did you get involved with NADA?

BF: A past NADA board member representing the state of New York encouraged me to get involved with NADA. I was elected to the board in 2006. Since then, I have served on various committees and was elected vice chairman for the 2014 term.

CBT: What drew you to run for the chairmanship?

BF: Over the past several years, there have been several economic and industry issues facing dealers that resulted in legislative and regulatory challenges in Washington. This is when I realized how important NADA is to dealers, and it encouraged me to get more involved and seek the chairmanship.

CBT: As you know this has been a year of ups and downs for car dealers. Record highs in car and truck sales and record highs in recalls and regulations from the federal government. What issues will you focus on as you take the helm as chairman of the NADA next month?

BF: There are several important issues on the front burner at NADA. Preserving the ability of new-car dealers to competitively price auto loans in their showrooms for their customers is one of our top priorities. The U.S. finance market is extremely competitive and we want to keep it that way. When banks, credit unions, captive finance companies and other lenders all compete for business, it drives down the cost of auto loans. We’re urging members of Congress to cosponsor legislation that will rescind the Consumer Financial Protection Bureau’s flawed guidance on auto finance and keep auto loans affordable and accessible for all car buyers.

We’re also promoting the benefits of franchised dealers. The benefits to consumers sometimes get lost and we need to be out there promoting the price competition, warranty and recall accountability and local economic benefits that dealerships bring to communities everywhere. Local dealers provide the best, most competitive and most cost-effective system for the buying and selling of new cars for both car buyers and manufacturers. Car buyers benefit from price competition between local dealers that drives prices down. A network of local dealers provides extra accountability on warranty and recall claims. And there are great economic benefits to having local businesses create well-paying jobs to sell, finance and service cars.

At the same time, franchised dealers provide manufacturers with a highly-competitive distribution system for their products at virtually no cost. Local dealers have collectively invested more than $200 billion in property and storefronts to sell new cars and light trucks.

CBT: Should dealers be concerned about companies like Tesla that want to sell their vehicles by bypassing franchised dealers to sell directly to consumers?

BF: Direct sales may entice a niche player serving a small market, but for any company that wants to sell new vehicles in the mass market, the dealer franchise model is proven to work best. Executives at Tesla have even indicated that they will move to a franchise model if and when their sales volume increases.

CBT: What has the NADA been doing to help dealers maintain their existing state laws supporting the new car franchise system?

BF: NADA does not have state chapters, but we work closely with local and state dealer associations, especially on promoting the benefits of franchised dealers. NADA launched a “Get the Facts” initiative last June to inform consumers, policymakers and journalists about the benefits of the dealer franchise system. A series of videos, infographics and fact sheets can be found at www.nada.org/getthefacts. A large number of dealer associations are using the videos and materials to promote the franchise system in their respective states.

CBT: Dealers were concerned that they were put in the hot seat with consumers bringing their cars back for recalls. Many thought that the manufactures dropped the ball on the handling of the recalls this year. How do you feel the OEMs have handled the recall situation this past year and what will the NADA be doing to ensure that OEMs do a better job of working with their dealers on future recalls?

BF: It was a record year for vehicle safety recalls in 2014. When dealers are called upon to address a recall, they see an opportunity to help get their customers back on the road and restore confidence in the brand. I’ve been a dealer since 1976 and our dealerships have handled numerous recalls across multiple brands over the years. When something goes wrong on the assembly line, automakers turn to their franchised dealers’ service departments to make things right – all at no cost to the customer.

Handling safety vehicle recalls is just one of the inherent consumer and manufacturer benefits of the dealer franchise network. Manufacturers get a network of thousands of local, professional service locations to perform recall work, consumers get professional and local service and dealers are compensated for the work. It’s a good deal for everyone.

CBT: Warren Buffett recently jumped into the car business and many dealers feel that the industry may end up being controlled by a small group of 10 or 20 publically traded dealer groups. What do you say to dealers who feel this way?

BF: There’s been some consolidation in automotive retailing, but still today more than 95 percent of the 17,800-plus franchised new-car dealerships in the United States are locally and privately owned. NADA represents dealerships of all sizes from family-owned businesses to publically held dealer groups. NADA has 63 members serving on its board of directors, which includes a diverse makeup of dealers who meet regularly throughout the year representing the interests of all dealers. NADA is a great organization and we work hard to have the back of every dealer in America.