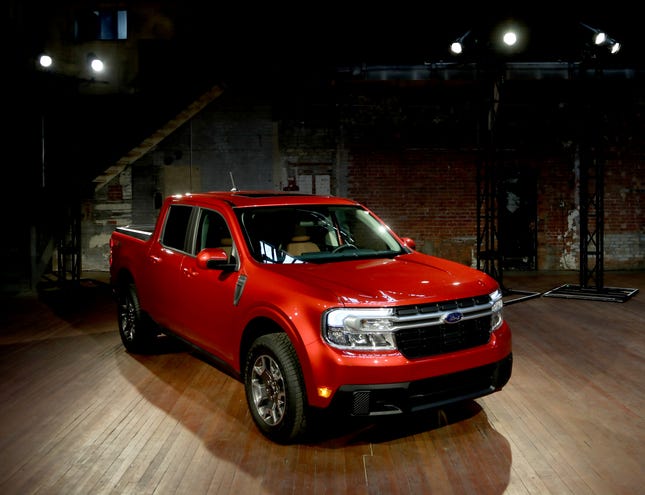 On June 8, Ford officially debuted the 2022 Maverick compact pickup that’s been a poorly kept secret for months. Bringing a new entry-level truck to their lineup that slots in below the Ranger, appears to be an excellent move, competing for the efficient yet capable segment that has recent entrants like the Hyundai Santa Cruz.

Tuesday’s debut marks several first for the North American carmaker, both with the Maverick itself as well as the details around the public news release.

Perennially one of North America’s best-selling vehicles and the best-selling pickup truck for 53 years straight, the Ford F-150 proves that Americans have an appetite for trucks. Yet, a full-size truck or even the midsize Ranger is too large for many occasional-use drivers that might seldom venture from the city streets. The Maverick capitalizes on the compact market for Ford in a way their other trucks don’t.

Using front-wheel drive as the basis much like its smaller SUVs and a unibody design that integrates the cab and truck bed as one unit – similar to the Santa Cruz and Honda Ridgeline – the Maverick also offers seating for up to five and modest towing abilities. It appears to be a model ripe to be picked in a starving segment.

The 2022 Ford Maverick is also the first pickup truck in the legendary carmaker’s history to come with a standard hybrid engine. Embracing the transition to electrification, the hybrid model will be extremely efficient. Ford truck group marketing manager Todd Eckert said, “The Maverick product proposition is like nothing else out there. It’s a great-looking truck featuring four doors with room for five adults, a standard full-hybrid engine with city fuel economy that beats a Honda Civic, plenty of towing and hauling for weekend trips or do-it-yourself projects… we believe it will be compelling to a lot of people who never before considered a truck.”

Hybrid powertrains certainly aren’t new, but making it standard while offering a gas-only version as an option demonstrates the direction Ford is going in the future.

First use of Ford’s TikTok channel

For Ford, the debut of their new compact truck was an opportunity to use TikTok for the first time. The short video clips bring Ford’s marketing into the current decade, precisely where their intended purchasers will likely be participating. Ford is late to join TikTok with nearly all their competitors’ profiles boasting many times the number of followers and dozens of videos in their repertoire. However, late is better than never.

Ford has often used celebrities to promote the brand and products, as is the norm in the industry, but the Maverick’s debut will be led by actress Gabrielle Union. The Maverick will be featured on her own Instagram and TikTok social channels.

Again focusing their attention on a new segment and audience, it seems appropriate that Gabrielle Union presents the truck officially rather than Ford’s go-to Dennis Leary. The goal is obviously to attract a younger, more diverse audience for this new truck.