This past week, you would have had to have been under a rock to not hear about Elon Musk’s latest creation. His futuristic Cybertruck, a modern and sleek reimagining of the pick-up truck, has been making waves on and offline.

From the infamous “glass shattering” incident to the materials used to make this truck, there is a lot to take in regarding the tech innovator’s newest unveiling. So, if you need to get up to speed about the Cybertruck as well as the unveiling, stay tuned.

A Mishap Derailed a Pivotal Moment

During the unveiling, Elon Musk had a man hit the windows of the truck with a sledgehammer to show the Cybertruck’s durability. Unfortunately, things did not go according to plan. Once the sledgehammer met the window, the glass immediately shattered. While it would have seemed that the claim for durability is now proven to be untrue, Musk replied with an explanation. He explained that the man involved had done an earlier demonstration where he hit the window with a steel ball. This act weakened the framing, causing the infamous shatter. 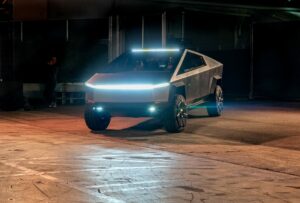 According to Musk, the exterior of the Cybertruck is steel alloy metal which are the same materials used in the construction of SpaceX rockets. The truck was said to be fashioned in a way that a smaller firearm or nine-millimeter gun could not pierce the alloy material. Details such as this make it challenging to think of who the target audience is for this vehicle. While this could be a selling point for the military or high net worth individuals who need protection, it is hard to think of this being a significant draw for the majority of consumers.

There are Hundreds of Thousands of Orders

Within three days of the unveiling, Musk tweeted out that there were 200,000 orders for the Cybertruck. Consumers only needed to put down $100 to preorder that truck that will begin production in 2021. While this vehicle does have a luxury feel, there are two price points. The first is a $69,000 three-motor all-wheel drive, and the second is a more standard model starting at $39,000. While both are above the average price of a new car, they are much more affordable than previous Tesla models.

The unveiling created a variety of responses and reactions. Some have praised the car’s technologically innovative features. It has a 14,000-tow capacity, allows users to charge their laptop off the grid, and has semi-autonomous driving technology. However, while the specifications may be impressive, many consumers are not happy with the car’s look. A variety of internet memes have popped up about the car’s design as well as the window-smashing incident. The popularity seemed to have not put a dent in potential interest as, again, preorders have risen to 200,000.

When it comes to Tesla, Elon Musk has seemed to pride himself on being against the curve. From wanting to sell directly to consumers to creating a car with metal from rockets, Musk has become the ultimate automotive disrupter. However, there is one way that Musk is falling in line: the vehicles that Tesla offers. Ford, General Motors, and Fiat Chrysler all have a higher quantity of larger vehicle models (SUVs and pick-up trucks) than sedans or mid-sized cars. Now, Tesla’s roster is also mimicking this trend. Larger cars are still a massive seller for many OEMs. So, it is interesting to see an innovative player like Musk follow in the footsteps of more traditional carmakers.

The Cybertruck is Preparing to Hit a Tesla Showroom Near You

Production on this next Tesla model is slated for late 2021. However, when it is finally ready for purchase, it will not be the only innovative, or powerful electric truck out there. The Rivian, Ford F-150, GM’s Electric Truck, and a couple of other pick-up truck models will be competing for market share. As more is unveiled about this vehicle, it will become evident if the Cybertruck has a long-term audience.