“The framework released today by Congress and the Trump administration places the tax reform train squarely back on its tracks,” said AIADA President Cody Lusk. “The border adjustment tax would have driven up costs on everyday goods and put Americans out of work. Now that it’s off the table, and the business community is no longer divided by this issue, we can now get back to work on supporting this important legislation.”

The American International Automobile Dealers Association (AIADA), whose members employ 577,000 Americans and accounted for 59 percent of all U.S. retail vehicle sales last year, would have been uniquely impact by a BAT. Because no vehicles are made with 100 percent American-made parts, the BAT would have added an average of $2,000 to the cost of all new cars sold in the United States, regardless of their origin. The decision by the White House and Congress to listen to the concerns of consumer and business groups – including AIADA – and scrap the BAT allows auto dealers to throw their support behind a tax reform plan that promotes economic growth, rewards entrepreneurship, and creates a level playing field for all Americans.

A 2017 study by the Center for Automotive Research (CAR) estimates that U.S. light vehicle sales would immediately fall by 5.6 percent following implementation of a border adjustment tax, resulting in a $34.6 billion overall cost to U.S. consumers. For more information on how a border adjustment tax would have impacted America’s international nameplate dealers, and how they have spent much of this year battling it, visit www.aiada.org/bat. 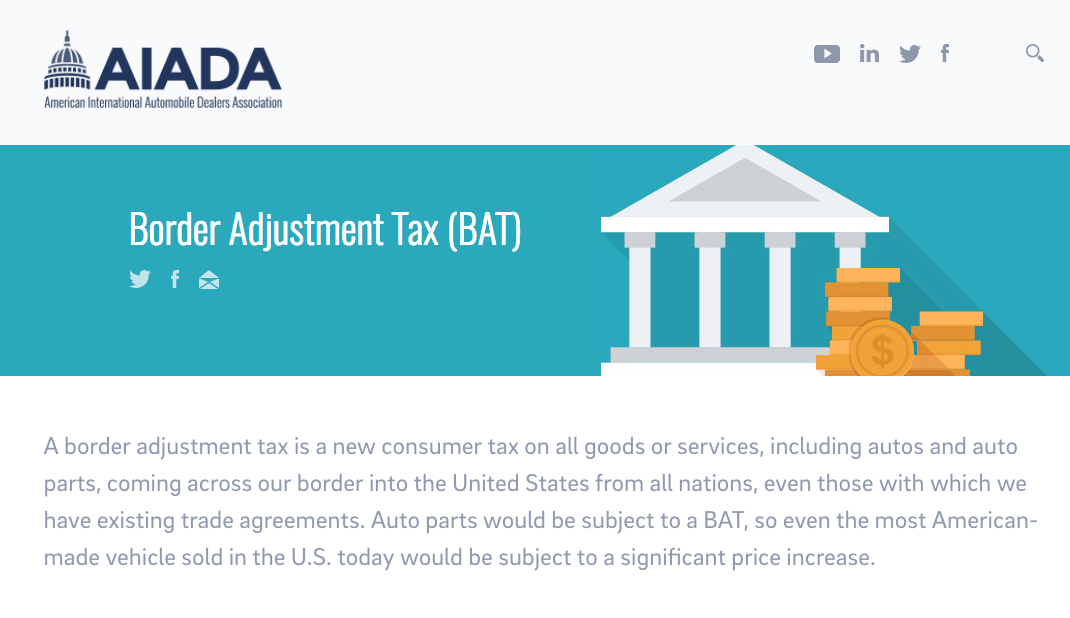